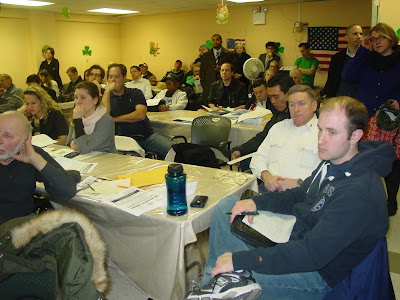 Let's look at some links before we get to some CB1 thoughts from last night:

The shelter isn't dead after all: Greenpoint's McGuinness Boulevard loft building was sold to a hotelier with a reputation for developing luxury hotels and also running single-room-occupancy hotels for convicted felons.

Real estate maven Matt Chaban has a long (for the Observer), well-written piece on the bike lane debate-- which reaches a different conclusion than blaming the media for fomenting the crisis.

Tim Sohn has a nice piece in the Times about St. Cecilia's Church becoming an artist haven. Although Monica Salazar has put together this kind of operation in the neighborhood for over a year now.

Dog owners in North Greenpoint want a dog run of their own.

Bushwick small business owners and labor leaders fight back against a proposed Walmart.

*The Brooklyn Ink has a good look at the story of a Bushwick Avenue house through the generations. These kids are on their game this semester (just like last semester).

And coffee prices could be going up. But I take my coffee black...