Police have released video footage of the two perps who stole Steve Levin's car.
6:30 PM There's a sh-t ton on the agenda tonight, and unsurprisingly it's a packed room. We've got two major parks items (a tennis bubble in McCarren and the Rodney Street playground in the south side) plus concerns about a dog park at Commercial Street, a spot rezoning, some 400 McGuinness stragglers, and Lord knows what else but we're going to find out.
One update to report. Steve Levin's car is still stolen. As one of Levin's staffers explained, "that sh-t is gone."

6:34 PM: District Manager Gerry Esposito calls the meeting to order and Rami Metal gets the meeting rolling with some announcements in Steve's absence. 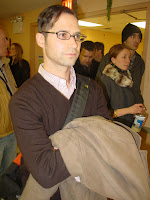 *The Department of Transportation is moving closer to removing the fence at Noble Street.
*Steve wrote a letter about moving the MTA's lot on 65 Commercial Street to Maspeth
Folks in Maspeth found out about it and weren't happy so we've been getting a lot of calls-- it's not over, especially if it becomes a fight between Queens and Brooklyn," says Rami.
And you know Queens Get the Money
*Also, several senior centers have made the city's cut list.
*There was a possible hate crime between Wythe and N. Fourth. It was a horrific attack.

Evelyn Cruz from Nydia's office and she's very hot about moving the Commercial Street bus depot to Maspeth, where Nydia also represents. So, this is going to be a problem.
Also, Nydia has drafted a letter about proposed senior citizen cuts for centers.

Laurie Wheelock of Assemblyman Vito Lopez's office calls the senior center cuts "absolutely frightening" and she is fighting along with everyone on this.
There's a rally on Sunday at 11 am with Speaker Silver on rent regulations.
And there's a new rep in Vito's office just on Loft Law items. 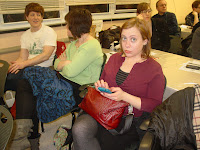 And Jason Otano from Beep Markowitz's office has some reappointment forms in the back for new and future members to join the community board. Future members like Lacey Tauber?

6:47 PM: Chairman Chris gives the mic to Parks deputy Marty Maher who will give a Parks presentation about the proposal to enclose McCarren Park's tennis courts with a bubble.
It's going to be a 15-year lease, Maher, and half the money from concessions will go to the park.
"Whether it's cost feasible or not, it' remains to be seen. There are two operators interested in it," says Marty Maher.
Ward wants to know whether tennis will be year round and it will.
There's a question about cost and a parks official says hourly fees is $40 to $50.
Sean Hoess has a question about what happens after 15 years, and Marty Maher says that it would revert to the owner who built it though the city would own the lights.

A NYC Parks Advocate rep bullies his way to ask about the fee structure and environmental impacts. Marty Maher flicks the question away, noting that the fee is embedded in the RFP. 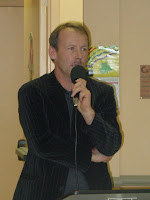 7:03 PM: Sean Hoess from McCarren Tennis supports the indoor court but wants to talk about diverting fees toward maintaining the courts during the summer winter, and he wants the city to own the equipment after 15 years. He's followed by Arthur Bobko, one of the bidders for the project, who sounds a lot like Mieszko.

7:12 PM Portia Cook from Parks takes the mic for a presentation about 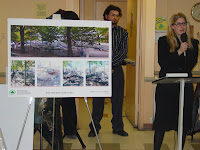 the Rodney Street playground redesign. This sounds like a major upgrade for the area, but it's not the dramatic BQE decking project that Councilwoman Reyna has been shopping for months.
The project won't have additional lighting but there are a lot of other improvements.

7:20 PM: Hollywood insider Tony Argento from Broadway Stages wants to make a section of North Henry Street one-way. Excuse me, I'm a little star struck.
"A lot of times I'm trying to pass on the street and I have to make a U-turn."

There's also a rep from Boar's Head who wants to turn Bogart Street into a one-way street, because Bogart is difficult to maneuver for trucks.

7:33 PM Chairman Chris introduces Bill De Blasio to generous applause. Miss Heather takes a photo suggesting a community member is having an erection as Bill is speaking. That's a little below the belt. 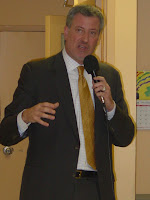 "My office as public advocate is pretty straightforward-- I'm a watchdog for the city. I don't want to talk about the snowstorm but my street wasn't cleared until Wednesday."
De Blasio also talks about the commonalities of his office and community boards before getting to three issues, which he illuminates in several quotes with anecdotes:
1. "This night, you'll find that there are a lot of people who can't get heat and hot water. It's illegal."
2. "Will my school be co-located in another school? We've had some success with a school in Canarsie which I have played a strong role. 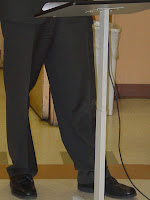 3. "Finally, the budget. Every resident is trying to get Albany to recognize that we're taking a big hit with the budget. I take issue with the mayor's pronouncements that 4,000 teachers need to be laid off, 19 day care centers will be closed...
Layoff thousands of teachers, you don't know when we're going to get them back."
De Blasio has some forms to hand out for people who agree with his stances and takes question.

Mieszko Kalita: We have a local problem. 400 McGuinness Boulevard has had a proposal to put in a halfway house/ three-quarter house in its site. [Mieszko trails off, so I'll have to catch him in the hallway to find out what he's saying].
De Blasio: This is the first I'm hearing of this and I'll try to help.

Tish Cianciotta has a question about Mayor Bloomberg's "history" of closing firehouse.
De Blasio: There's a fundamental philosophical problem where the mayor thinks we can do more with fewer firehouses. I don't agree with him.

Esteban Duran asks about co-location of charter schools and invites Bill to the district when these meetings are held.

A non-board member wants to talk about the Polish Slavic Center "going in the wrong direction" likely because of its new liquor license. But he rambles badly and Chairman Chris does not cut him off.

Bill heads out, gives Tony Argento a man-hug, and takes a receiving line of commenters including the Polish Slavic Center guys.

Inside, Felice Kirby and her zoning lawyer have a presentation about Teddy's Sidewalk Cafe application. They haven't had a sidewalk cafe since 2005 so now they're requesting a commercial overlay for the block. Strangely, this item receives an inordinate number of questions, so I hit the hallway to talk to Bill.


A man named John has a public announcement about liquor licenses:
El Retono. If you're looking for one to deny, this is the one! Do you want the address? It's at 191 Graham Avenue, and they've had citations for health issues.

8:16 PM: Public session is closed!-- and Gerry takes the roll.
Chairman Chris defers his report in the interest of time. Halleleujah!

Esteban's gives his Education report, with a motion for a letter on community block grants. It passes.
Also, Cathie Black showed up to a District 14 meeting and Esteban notes that she "evaded" questions.
Finally, Amare Stoudamire dedicated a new basketball at Taylor Wythe

Land Use Wonderwoman Heather Roslund notes only one land use issue regarding 53 Hope Street, for a waiver for on-site parking. She explains the entire item in glorious detail

Phil Capanegro form Parks and Waterfront will take up the tennis bubble next meeting.

Ryan Kuonen from Environmental-Sanitation is asking for a technical review of the fart factory that the DEP is proposing with National Grid.
She's also pushing for an update regarding Superfund and Newtown Creek- it's on the agenda at the next meeting.
And remember that $2 million from the $10 million that NYSERDA is supposedly managing? Ryan thinks the group is handling the funds poorly and does not like that the group wants to expand the funding parameters to a mile radius. Tracking.

8:37 PM Public Safety. You know what that means. 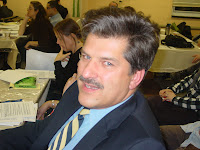 Next, a lobster joint.
Are the lobsters going to be farmed locally, Ward asks.
Mieszko" I hope not.
Mieszko lists three more bars before introducing another bar's 74 Wythe stipulations with stricter hours.
Mieszko asks for a vote, but Ward wants a motion to deny a liquor license for Club Rust on Metropolitan between Wythe and Berry.
Ward raises a stink and the motion passes. Sorry, Club Rust. 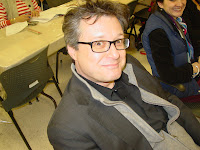 *Todd Eaton from Eagle Street is advocating for a dog run in North Greenpoint.

*A member of the firefighter's union notes the history of closures and the effect of the city's budget cuts on firefighters.

We've got a motion to close. Goodnight everybody. And thieves, return that car!
Posted by Aaron Short at 6:30 PM

Tell Boar's Head that Bogart Street isn't a truck route, so they shouldn't be trying to barrel their trucks down that street to begin with! Sheesh.

Is it just a coincidence that there's a meeting at Polish National Home (261 Driggs Avenue), which HAS a liquor license, to discuss rescinding the Polish Slavic Center's liquor license? (I think not!) Is PNH worried about competition?? Aaron, please investigate!

The PSC is in the middle of an administrative crisis. Graft currently lingers around every corner of that place. 261 Driggs is the only place left for the Polish community to have honest discourse. If Aaron is taking requests, then investigate PSC's finances.

I too support honest discourse. If Polish National Home is actively participating in the opposition to Polish Slavic Center's liquor license, it should come out and say so. People can draw their own conclusions. Behind the scenes activity only raises suspicion.

Give me a year to finish school, then I'll apply, I promise!

Unfortunately Aaron missed--- and I failed to film--- what I consider to be the highlight of the evening: a young man extolling upon the reasons why an eating and drinking establishment on Graham Avenue should not have its liquor license renewed. Anyone who was present can and will attest it was truly special. Women taxi dancing, waitresses hustling clients to buy drinks for them, drunken shenanigans, all that good stuff.

He topped it all off by pointing out the Health Department has cited this august establishment for having roaches, rats (methinks) and flying insects and then proceeded to call this "the perfect trifecta". How could I and a few friends NOT applaud after this speech? (We did.) I mean, he used the word "trifecta" for crying out loud!

Oh yeah: did anyone get the address for this place? I *must* see this for myself.