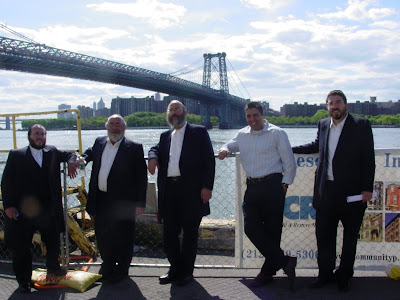 Before we get to some links, let's look at five longer news stories and features that are recommended reading.

When I first saw the Domino documentary trailer, The Domino Effect.. not Domino's Turnaround, I thought, is this it? It's shot extremely well but there's little context to the area's demographics all the political behind-the-scenes battles that occurred and it comes off as a slanted rehashing of old arguments.
But Brian Paul's essay in the Gotham Gazette shows that there's going to be substance in this documentary. A lot of substance. I'm encouraged- even if the piece buries the good stuff in the second-to-last paragraph.

Reid Pillifant at The Observer follows around Sarah Palin in Long Island and all signs point to a Palin presidential run.

Dana Rubinstein's excellent, well-timed piece on uber-media consultant Josh Isay is an example of Capital New York finding it's voice. Breaking out the fedora for a hat tip.

Keeping up the Observer/ former Observer trend in linking, Gillian Regan picks up a nice feature on a traveling seamstress covering Bushwick, Greenpoint, and Williamsburg for the Times. Breaking out another hat tip- but could I have this hat taken in? It's a tad large and I have a small head.