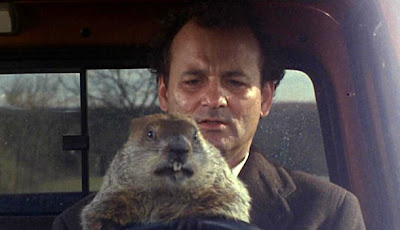 Mayor Bloomberg and Staten Island Chuck take a joyride to New Jersey after too much blizzard coverage gets to hizzoner.

Yes, Chuck, the Staten Island groundhog is predicting only four more weeks of winter but Artie, the 20-lb football-sized rat that has permanently camped out on the platform of the Morgan Avenue L-train station saw his shadow and scurried into a corner. So, Williamsburg will get more snow. Onto the links! 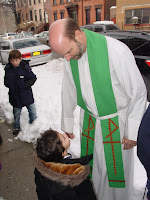 *Church officials called the police at Our Lady of Montserrat (and St. Michaels St. Edwards) on Sunday to provide security in case parishioners demonstrated before the Diocese closed the churches permanently. 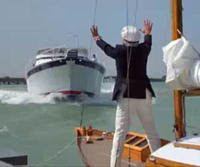 *Rich Calder at The Post brings news of the city awarding the contract for expanded ferry service on the East River to NY Waterway (which runs the Staten Island Ferry) and not to New York Water Taxi. Ward at 11211 expounds on the implications.

*WNYC's Jennifer Hsu visits Bushwick to find a man who makes tempeh from scratch in an incubator. My question: Is it radioactive?

*Windshields in Sheepshead Bay this morning look like the inside of my refrigerator.

*Eastern District (the bar/ cafe, not the art gallery) gets some love in the Times.

*Want to watch the Super Bowl around fans of either the Packers or the Steelers? Head to Cobble Hill.

*The Observer and The Brooklyn Paper round-up the wild-haired and mustached gents who entered the 2011 Brooklyn Beardfest and Stache Bash at The Bell House. Just a note, this blog's nominations for the All-Brooklyn Facial Hair All-Stars will be announced on Friday. Shockingly Brett Keisel did not qualify.