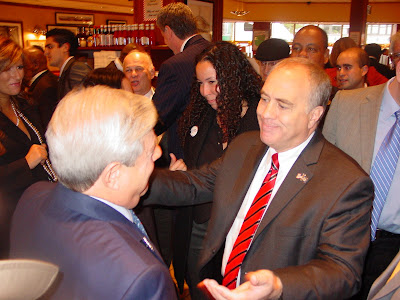 Bear with me, I have a lot of photos to upload for the weekend's events-- but in the meantime, here are five election-related stories that will bleed into Tuesday:

*Could a sitting comptroller (above in a soon-to-be-bromantic scene with Beep Markowitz) actually lose? Do New Yorkers even know what a comptroller is or who is running? Neither does Charlie Rangel.

*The Times predicts the State Senate will flip back to the Republicans and points to the Aqueduct scandal as a contributing factor.

*And in gubernatorial news-- Reid Pillifant from the Observer wonders if a new saner Carl would have had a better shot of beating Andrew Cuomo if he acted this way from the beginning.

*You've probably picked up an L magazine already and flipped through its 50 best blocks in Brooklyn. They left out Best Block containing a political clubhouse that is supposed to be a center providing respite services for seniors (Wyckoff Avenue bet. Grove and Menahan Streets).

*With few competitive races in the state except counties above Westchester (and maybe that pesky Bay Ridge congressional race), New Yorkers went to Washington this weekend for the sanity rally. The WG News and Arts was there and took pictures.
Posted by Aaron Short at 11:14 AM