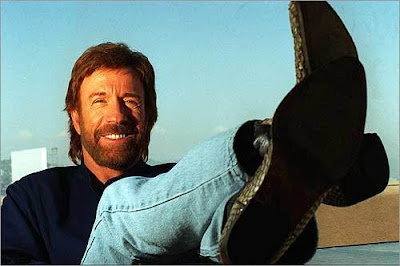 As voters fill out ballots like angsty, pimple-faced teenagers completing the SATs, A Short Story wants to take a moment to offer its first (and last ever) endorsement for a candidate on the ballot today.
His name is Chuck Norris and he's running for Probate Judge in Norwich, Connecticut.
Norris has been receiving an emphatic letter-writing campaign of supporters including Raymond Dussault, chairman of the Norwich Republican Town Committee who writes "Norris will bring discipline, experience and compassion to the court," and Albert Trombley, also of Norwich, who argues, "based on the combination of Chuck’s legal experience and compassion for others," Norwich residents should cast their vote for Norris.

And then there's Trish Sullivan of Voluntown, who writes, "Some lawyers spend their entire careers involved in just one area of the law. They’re never exposed to — or learn how to handle — cases other than the limited matters that they have chosen to study. Other lawyers, such as Chuck Norris, have spent their careers studying and learning all areas of the law in order to represent their clients at each and every stage of their lives."

All areas of the law people. And when reason fails, he will roundhouse kick the defendant through the windshield of his car.