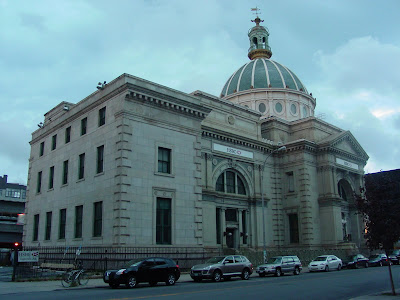 From piers and parks to proliferating projects, let's take a look at a busy week in building things along the Williamsburg-Greenpoint waterfront:

*Brooklyn 11211 is raising a fuss about the impro-pier in 11222, which would allow its developer Stiles Properties to build unit with more density on its site adjacent to the waterfront. The city announced it would put forward an RFP for the Java Street Pier in July, but Councilman Steve Levin put a press release out about the non-competitive RFP process too, which the Brooklyn Eagle picked up. The Greenpoint Gazette expands on the Pier back story and Ward registers his ambivalence about the pier:
Is this a bad thing? That's not entirely clear. Greenpoint needs access to the waterfront, and an innovative public/private partnership may be what is needed to kickstart a very moribund development environment on the Greenpoint waterfront. Certainly the City isn't in a position to build out the pier and provide the public amenity. So this may be the best way for the City to follow through on its promises from six years ago, and for the Greenpoint community to start to reclaim its waterfront.

*On a similar line of thought, ferry service is set to return to the east river next spring, giving a place for new condo residents around N. Sixth Street to get on the boat and get to Manhattan. More ambivalence on this one, as 11211 notes this is mostly good news but fares must come down and there should be a transfer of some kind to bus and train service.

*Did I mention the landmarked Williamsburgh Savings Bank is for sale? Well it is. Give Massey Knakal a call to find out the price (it's not cheap).

*Also for sale is the former home of the Polish American Legion on Leonard Street. It will now become 18 condos. This is like one of those Flight of the Concords episodes where an old-school dons promises to bring the boys to his social club but they can't find the headquarters because it is now a condo. Or maybe it was Z-boys. Someone help me here.

*Finally, the New York Times reflects on the career of architect Karl Fischer (of Ikon Building fame) and looks ahead at a new boutique hotel off Bedford Avenue from Graves World Hospitality anchoring the other end of McCarren Park. It's a brave new world on the northside.
Posted by Aaron Short at 2:34 PM