Shark Week at The Rockaways 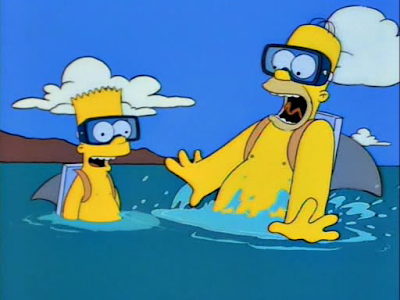 City Room was all over that shark warning this weekend in the Far Rockaways. I was there Sunday and the orange-clad lifeguards were so wound up they blew the whistle every time an eight year old swam past the undertow.
Apparently a shark sighting, or three, contributed to the jumpiness of many orange-clad Queens lifeguards who follow in the steps of Bernie Madoff to save the lives of city surfers. Throughout the afternoon, the lifeguards ran parallel to the ocean, blowing whistles and waving for drifting swimmers to come in from the deep. Finally, by 4:30 pm, everyone was called out of the water, though the surfers returned about half an hour later.
My favorite quote from the City Room story? Check out this surfer dad's take on the whole thing:
Still, regular surfers here, like Mr. Karinsky, scoffed at the possibility of danger. Several hours after the sighting, he nodded toward his child out surfing in the area where the shark, or sharks, had been swimming.
“It’s a regular part of life in the ocean,” he said. “The water’s warm, the bait comes close to shore, and the bigger fish chase the bait.”

More importantly (or just as importantly) since you're looking to round out your blog with some nature stories -- any reporting on the geese protests yesterday? (Any rumored plans for the Canadian Geese in the State Park?