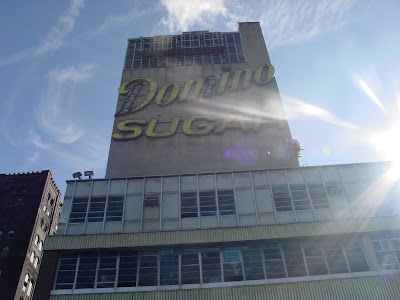 By now you've heard that Domino Sugar passed the City Council's Land Use Committee, all but clearing the way for its final passage next month. You've also heard that the Loft Law bill passed both houses in the legislature (and a recent amendment swapping Maspeth for Long Island City passed too). Let's go around the horn!

Domino:
You've read the break, Erin Durkin's report in The Daily News and probably the New York Times' report filed by Nikki Bagli's dad (sour note: Nikki Bagli is leaving 3rd Ward for... gasp!... graduate school!), but there are a few other pieces to clock in with, starting with zoning man Matt Chaban's report in Architect's Newspaper. Chaban asks how do you make a building smaller without actually making it smaller? The answer is the sound of one hand clapping... but he does extract some nuggets from Susan Pollock who is sticking with her zoning envelope and mailing it all the way to the bank. Arch Paper:

“The zoning envelope remains the zoning envelope, so the project will continue to look much the way it is,” Pollock said. “Obviously it will have to change some with the heights coming down, but not much from our current plan.”

Pollock would not say whether the densities would be achieved through bulkier, wider buildings or smaller apartments. “There’s enough room to make that possible,” she said. The developer has held firm to its numbers throughout negotiations, arguing that it could not afford the project with anything less. “As we’ve always said, we need to keep those numbers to bring the community all of the benefits we promised,” Pollock said.

Over at Streetsblog, Noah Kazis breaks down the deal, embracing in the small victories of parking spaces reductions and a new shuttle bus paid by the developer. Kazis nicely adds expert voices from Columbia and the University of Pennsylvania, as well as NAG organizer Ryan Kuonen on whether shuttle buses are a precedent for development going forward, but concludes that more could have been done in the deal.

Of course, the amount of parking originally proposed was so enormous that the New Domino will still add a flood of cars to the neighborhood, congesting the free Williamsburg Bridge just feet away, guzzling gas and exposing pedestrians and cyclists to greater danger. The policy that larded Domino with parking in the first place -- attempting to build enough off-street automobile storage to match the car-ownership rates of the surrounding area -- needs to be discarded as too disconnected from broad transportation goals.

Moreover, while the shuttle buses could quite easily disappear after a few years, these parking spaces are forever.

Brooklyn11211 gives his analysis of Domino (I bet he'll likely be a member of that new Domino Advisory Council that Steve Levin is setting up), and it's not pretty. His key paragraph:

The changes that were made to the development side of the project really amount to rearranging deck chairs. They certainly don't address any of the core objections raised by Community Board 1 or Borough President Marty Markowitz (who still has issues with the project). The height of the two tallest towers are reduced by 60' each (to 34 stories), but that floor area is just reallocated within the development site. And one of the few changes made by City Planning - reducing the height of one of the office towers - is undone by the Council. The net effect is no reduction in density, no offsetting of the per capita reduction in open space for Williamsburg (a "statistical fractional decrease" in the words of the developer - an actual reduction in available open space to you and me), no mitigation of shadow impacts on Grand Ferry Park or neighboring row houses, and no improvements to an overburdened transit system (other than a shuttle bus to make it easier for Domino residents to get to the overburdened transit system).

More roundups to go, as the New York Post, Greenpoint Gazette, Epoch Times, and Brooklyn Eagle check in. Meanwhile Eliot Brown at The Observer was covering state budget issues, so Sam Levin fills in with this story, and Courtney Gross at The Gotham Gazette was all over the city budget, so Gail Robinson takes over here.

I would be remiss in not mentioning the debut of former Observer politics editor Katharine Jose, who kept a diary of the Domino proceedings for the spanking-new Capital NY. Nicely done Katharine. Thanks for the shout-out. Back atchya.

Finally, The Real Deal looks to the property just south of Domino and sees... activity. They just renewed their permits for a 3-year extension, and 11211 looks at the work that has been done in the past six months. You're going to be hearing more about this.
Posted by Aaron Short at 11:21 AM