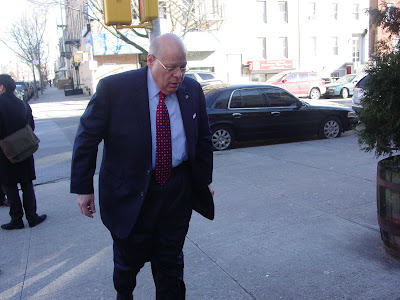 It's over.
State Senate kingpin "Hot" Carl Kruger turned himself into federal authorities this morning amid federal corruption charges, linking Assemblyman William "Baby" Boyland, small-business lobbyist Richard Lipsky, and a slew of other people including real estate investors and a community board district manager's son, Michael Turano.
The most serious charges involve conspiracy and money laundering with a max count of 20 years.
Kruger allegedly took bribes close to $1 million for producing a full range of services on behalf of lobbyists including pushing the merger of two failing hospitals and delaying legislation
The story is everywhere.
Rich Calder and Andy Campbell at the New York Post, Rashbaum at the Times, Adam Lisberg and friends at The Daily News, Tom Tracy at The Brooklyn Paper, and David Freedlander at The Observer who is already speculating on his replacement and has harsh words from Kruger ally Frank Seddio.
Lots of unanswered questions here.
What is the extent of Lipsky's involvement in the case and his other lobbying jobs?
How will this affect development at Atlantic Yards and several financial players?
What's the relationship between Kruger and Dorothy Turano, CB 18s District Manager?
Will Carl start talking and should anyone else get nervous?
But this proves that US attorney Preet Bharara is the Blair Waldorf of New York politics.

It sure doesn't look like he spent the money on suits, that's for sure.