Community Board 1: Joe Vance, Steve Lenard, and no food 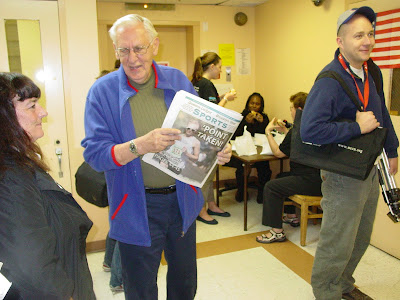 It’s 6 pm and the doors to 211 Ainslie are locked, before Marie lets everyone in.
Karen Nieves is nursing her fifth coffee of the day and we have a few stragglers including eight “ambassadors” from national public radio here to talk to community members about a new program designed to connect Williamsburg residents with WNYC, because, why reinvent the wheel? 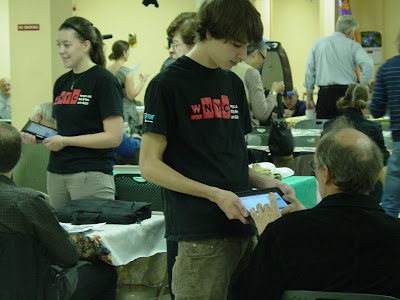 WNYC’s Azi Paybarah couldn’t be here tonight so he sent his secret army instead. 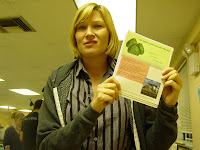 planners mafia charter member Kate Zidar is here too to talk about her Green Eggs Wetland Project which is appealing to funding for a wetlands project which may be eligible for funding from a pool of money administered by City Parks Foundation. She's working very hard to make a publishable photograph. Maybe next time?
The Chairman Emeritus makes an appearance but it sounds like he has to get going pretty quickly
Unfortunately, sad news to report. We will not be seeing the lovely Julia Morrow tonight because the Open Space Alliance has brilliantly scheduled its community meeting at the same exact time as the board meeting. In her place, we are joined by Caitlin Dourmashkin of the Northside Merchants Association (note: not EWVIDCO) who “hasn’t attended one of these things in years,” and... look at that… Debbie Feinberg, legislative liaison for Assemblyman Vito Lopez, subject of a brief piece on PolitickerNY. Let's see if she has a comment.

6:34 PM: Chairman Chris Olechowski calls the meeting to order, District Manager Gerry Esposito takes the roll and we move onto item one— a sidewalk application. It passes easily.

6:38 PM: Open Space Alliance board member Joe Vance begins to stir as Chairman Chris reads the description of the applicant’s zoning application. This project, a vacant lot on Wythe Avenue that hosted the Rock Yard parties, is asking for a zoning change from heavy manufacturing to 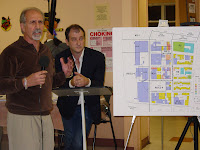 R-6 residential use. The property’s owner, Bruce Terzano, talks about his history in the neighborhood before passing the mic to Joe:
“He wants this to be a neighborhood project. We’re used to hearing from lawyers on this project but he came to me instead."
Joe describes the project as a six-story building with commercial on the ground floor and parking below, and a big backyard.
“By and large most of the development we’ve seen is geared toward young people. Bruce believes that eventually these people will have families and will want more space. He believes this project will be family-oriented."
CB1 member Jose Leon has a question about where the affordable housing will be, just as CPCR’s Susan Pollock and Barbara Baer arrive. Joe explains that the two buildings will be separate and that the nonprofit developer will eventually own the below-market-rate building.
We have more questions about what exist there now and whether commercial tenants will have to move out, and Joe covers a number of details including square footage, FAR and the number of units in the project (59 market rate and 18 below-market).

6:57 PM: Chairman Chris moves to the third item, a special permit for a building on the corner of Roebling, Metropolitan and Hope Street for on-lot parking spaces and 90 apartment units. We have a presentation from Patrick Jones, the applicant.
Jones explains that the owner of the 103-year-old building is applying for a certificate of occupancy to bring the old mixed-use industrial building into legal occupancy. The building, zoned for manufacturing use, has been occupied with residencies since the 1980s and has commercial on the first floor.
Ward asks a question about whether the request would retain retail use on the first floor and apparently it would.
Heather asks about the one-story building with the Roebling Tea House will be affected- and it will not be.
A community member who owns a building with commercial nearby speaks against the building's application for parking- mostly because it kicked out other tenants in the building.
This item is going back to Land Use on Oct. 27, so we'll have more then. 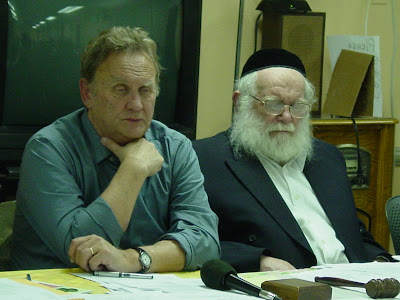 7:08 PM: Chairman Chris and Rabbi Webber react to yet another miner being rescued from a mine shaft by the Chilean government.

7:09 PM: It's Steve Lenard time! City Planning analyst Steve Lenard will attempt to synthesize a 600-page document on zoning text amendments in a 10-minute presentation. If there's anyone who can do it, it's Steve, a nominee for the 2010 Facial Hair All-Stars.

We pick up mid-stream: 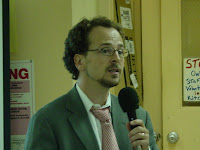 "Another clarification is about vesting. This is a situation in which we are changing the zoning to make it change the same way it is today because we don't want to create any negative impacts from this proposal. Under the vesting rules, if the zoning changes, and you are in construction, you have to complete the foundation before vesting.
In order to prevent a situation where half a lot is built on some rules and another is built on different rules- but for the purposes of vesting, it's considered one rule."

I'm so turned on right now. Does anyone want to launch a Steve Lenard planning fan club? Nate Silver can't get all the glory. C'mon Greenpoint blonde planners mafia, make this happen.

7:30 PM: Chairman Chris asks Steve to "please summarize" which draws a few laughs, before Steve notes that this is "only a small portion of the entire report."
A property owner is somehow allowed to talk about his specific situation for nearly five minutes before Heather Roslund cuts him off and summarizes his point. Thankfully we move on.
"Thank you very much Steve, for that intricate presentation," says Chairman Chris

7:39 PM: Chairman Chris asks Maria Batista from Diana Reyna's office to introduce herself and she announces a citizenship drive, and Chairman Chris introduces Liza Garcia as a new liaison to the community board. Debbie remains seated.

7:41 PM: Chairman Chris gives the mic to Rami Metal, who announces a new bill introduced by Councilman Steve Levin to suspend alternate side parking in areas surrounding film shoots, which receives some applause. There's an article in the Observer about it.
Sam Pierre also introduces himself as the nwe Brooklyn director of community affairs
"Carolyn Saunders-James retired and I definitely took her place. A lot of people told me that I have big shoes to fill but I have size 11 shoes."

7:49 PM: Chairman Chris closes the meeting and Gerry reads the second roll. We've got a quorum and there's a motion to approve the minutes. We're onto reports. I'll summarize.
Chairman Chris exhorts members to take committee meetings seriously by actually attending them from time to time.
District manager's report... as written.
Esteban makes a motion regarding a letter about a Throop Street building, inviting the commissioner to come out for a project. The motion carries. I haven't heard about this issue yet. Will follow-up. 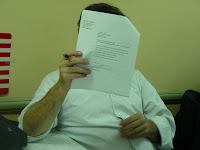 8:00 PM: Committee reports! Land Use kicks off and I'll summarize, but first, hey Ward Dennis. How's life in the cheap seats?
Heather Roslund explains the Northside Town Hall zoning request, which was approved 2-0-0. A watershed moment for the town hall project.
Heather also notes the comprehensive watershed plan meeting she attended in Borough Hall... and this goes on for a while as press row starts looking toward the ceiling for the Chilean rescue capsule to get us out of this meeting. 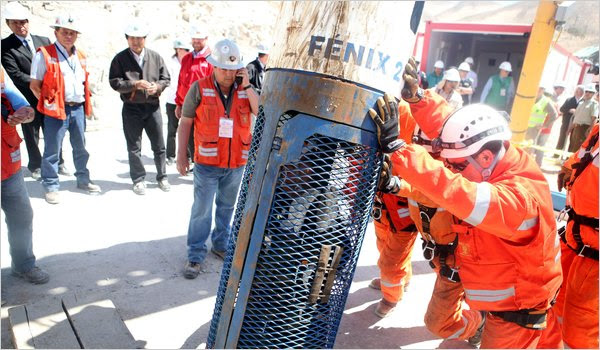 "Hey, does this thing go to Teddy's Restaurant?"

8:20 PM Public Safety! This committee deserves its own theme music.

Tom Burrows takes the mic, as Mieszko was in Las Vegas doubling down the board's expenditures. The liquor license renewals pass easily. Tom moves onto sidewalk applications before touching on liquor license new applicants. The new licenses pass.
Onto renewals, which include Pumps and The Production Lounge. Tom notes no complaints and a recommended approval, except for The Charleston, Spuyten Duyvil, Greg's Tavern and The Production Lounge, which are disapprovals. The board seconds it.
Also, Tom notes that Cono's closed so it's not up for renewal.

Now Mieszko is up with the second and "more important" part of the meeting. This calls for another Doda video.

Mieszko notes there is a 200 bed men's shelter proposed for McGuinness Boulevard, one block from the Greenpoint Hotel and proceeds to recap the meeting:
"More likely they were trying to defend themselves from an angry mob, and rightly so. As you can see we have no communication with Help USA. They are very bad at public relations. Clearly F. Clearly F. They are not talking to us. They have said it is way to early, but they have bought the building. It's not just for fun. The next day after the meeting, I received a petition with 700 signatures opposing the shelter...
Therefore I would like the board to send a letter to Department of Homeless Services saying we are clearly in opposition to building a homeless shelter at McGuinness Boulevard."
There's some bickering on the letter, as Ryan Kuonen raises the issue that Greenpoint has its own homeless problem that is badly underserved. Fortunately, Marie notes that Help USA plans to be servicing homeless men at the shelter site, and I once again remind our community leaders about proper grammar. The letter passes unanimously.

*Debra Masters and Kate Zidar note the new Superfund designation and their stormwater project, wetlands with structures 25 feet high meant to mimic the design of the Newtown Creek digester eggs, which will clean stormwater toxins that would go into Newtown Creek. And it will also be a park. And I'm on a horse. I call chairmanship of the Steve Lenard Planning Fan Club. The goatee's got to go though.

Typo in the vote? If not, how does this qualify as quorum?

Not a goatee - it connects to the sideburns through some gerrymandering.